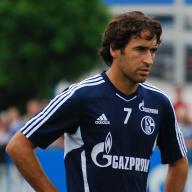 He grew up breeding his zeal for football and eventually made his way to Atletico Madrid's youth team and later became a member of the Real Madrid youth academy. After having played on several levels, he earned his debut professional deal with Real Madrid's second reserve team, Real Madrid C, and soon made his way to the first team.

His father is known by the name, Pedro González while his mother is Maria Blanco. He married Spanish model, Mamen Sanz in 1999. He has children – Mateo, Hector, Maria, Hugo and Jorge González.

As of July of 2020, he is Real Madrid's most capped player and he is also the highest Spanish scorer in European leagues.

Raúl's birthday is in 152 days

Where is Raúl from?

He was born in Madrid, Spain.

People born on June 27 fall under the Zodiac sign of Cancer, the Crab. Raúl Gonzalez is the 2968th most popular Cancer.

Aside from information specific to Raúl Gonzalez's birthday, Raúl Gonzalez is the 256th most famous Spanish and ranks 50th in famous people born in Madrid, Spain.

In general, Raúl Gonzalez ranks as the 29563rd most popular famous person, and the 418th most popular footballer of all time. “The Famous Birthdays” catalogs over 40,000 famous people, everyone, from actors to actresses to singers to tiktok stars, from serial killers to chefs to scientists to youtubers and more. If you're curious to see who was born on your birthday, you can use our database to find out who, what, where, when and why. You can search by birthday, birthplace, claim to fame or any other information by typing in the search box, or simply browse our site by selecting the month, the day, the horoscope, or any other clickable option.