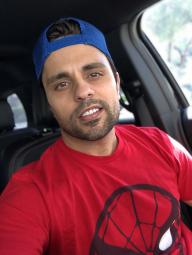 Ray William Johnson is an American YouTube star, actor, rapper, comedian and producer who became famous with his YouTube channel, Ray William Johnson. Over the years, he has created, written and produced a number of web series such as Equals Three and Riley Rewind. He voiced the character Quick Stop Hipster on the 2013 animated film Jay & Silent Bob’s Super Groovy Cartoon Movie.

Johnson is a product of Norman North High School, where he graduated in the year 1999. He advanced his studies at Columbia University. He actually began his social media exploits while he was in college.

In the year 2016, he started a romantic relationship with Kelly Farrell.

In the year 2013, he was named on the list of "Comedy Class of 2013”, which was prepared by the renowned US-based digital and print magazine, The Hollywood Reporter.

He cites famous comedians like Eddie Murphy, Dave Chappelle and Chris Rock as his influences.

Where is Ray from?

He was born in Oklahoma City, Oklahoma, U.S..