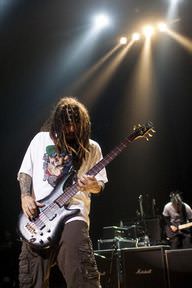 Title
AVIANO AIR BASE, Italy -- Airmen, Soldiers, DoD civlians, and local nationals enjoy a Korn and Flyleaf concert at the Palasport in Pordenone, Italy, Feb. 22, 2008. Korn is a band from Bakersfield, California, and are credited with creating and popularizing the nu metal genre. Along with other bands at the time, they have also inspired many nu metal and alternative metal bands throughout the mid 1990s and early 2000s.The band's catalogue consists of nice consecutive debuts. To date, Korn has sold over 30 million albums worldwide, including 16.5 million in the U.S. Korn earned 6 Grammy Award nominations- two of which they have won.
Author
U.S. Air Force photo/ Senior Airman Nathan Doza
Source
http://commons.wikimedia.org/wiki/File:Korn_at_Aviano_1.jpg
License
Public domain

Reginald Arvizu's birthday is on November 2, 1969.

Reginald's birthday is in 287 days

Where is Reginald from?

He was born in Los Angeles County, California, U.S..

People born on November 2 fall under the Zodiac sign of Scorpio, the Scorpion. Reginald Arvizu is the 1967th most popular Scorpio.

Aside from information specific to Reginald Arvizu's birthday, Reginald Arvizu is the 14090th most famous American and ranks 10th in famous people born in Los Angeles County, California, U.S.

In general, Reginald Arvizu ranks as the 24838th most popular famous person, and the 77th most popular bassist of all time. “The Famous Birthdays” catalogs over 40,000 famous people, everyone, from actors to actresses to singers to tiktok stars, from serial killers to chefs to scientists to youtubers and more. If you're curious to see who was born on your birthday, you can use our database to find out who, what, where, when and why. You can search by birthday, birthplace, claim to fame or any other information by typing in the search box, or simply browse our site by selecting the month, the day, the horoscope, or any other clickable option.