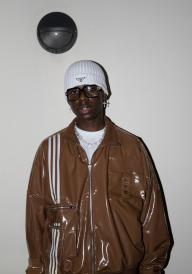 Rema is a Nigerian music phenomenon who outside of the industry is officially named Divine Ikubor. The singer and rapper is mostly recognized for his hit song “Iron Man” of 2019. The song appeared on his first-ever EP titled “Rema”.

In 2022 the singer gained additional fame after releasing another hit song "Calm Down", off his debut studio project "Rave & Roses".

He was nominated alongside other Nigerian stars, Wizkid and Burna Boy, at the 2020 edition of the BET Awards. In 2020 he linked up with American rapper Becky G on "Dumebi Remix".

His song “Iron Man” was chosen by former US president Barack Obama as part of his 2019 summer playlist.

He entered the music industry as a teenager.

His songs have appeared on the soundtrack of soccer video game FIFA 21.

He started RnA, a rap collective alongside Alpha P.

He became a signee of the record label known as Jonzing World in 2019.

Rema's birthday is in 85 days

Where is Rema from?

He was born in Benin City, Nigeria.