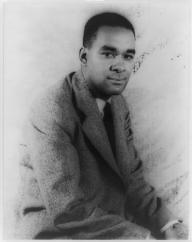 He was an American author who is known to have specialized in novels, poems, non-fiction and short stories. Most of his works were centered on significant plight of violence, discrimination, oppression, and injustice, which African Americans in the late 19th until mid-20th centuries suffered in the North and Southern parts of America. Due to his rigid acclimations, most schools of thought credit his works for having changed the racial relationship in America during the mid-20th century.

His father, Nathan Wright was a sharecropper while his mother, Ella Wilson was a school teacher. He is known to have had a brother named Leon Wright. He got married to Dhimah Meidman in 1939, a brief marriage that ended in 1940.

He married Ellen Poplar in 1941 and they both stayed married until his death in 1960. His children are Julia and Rachel Wright.

He was installed into the "Chicago Literary Hall of Fame" in 2010.

His father dumped his family when he was 6.

His works have been translated into several languages such as Spanish, Russian, German, French and more.

The artist must bow to the monster of his own imagination.Richard Wright

The impulse to dream was slowly beaten out of me by experience. Now it surged up again and I hungered for books, new ways of looking and seeing.Richard Wright

People born on September 4 fall under the Zodiac sign of Virgo, the Virgin. Richard Wright is the 2192nd most popular Virgo.

In general, Richard Wright ranks as the 28922nd most popular famous person, and the 735th most popular author / writer / novelist / playwright of all time. “The Famous Birthdays” catalogs over 25,000 famous people, everyone, from actors to actresses to singers to tiktok stars, from serial killers to chefs to scientists to youtubers and more. If you're curious to see who was born on your birthday, you can use our database to find out who, what, where, when and why. You can search by birthday, birthplace, claim to fame or any other information by typing in the search box, or simply browse our site by selecting the month, the day, the horoscope, or any other clickable option.