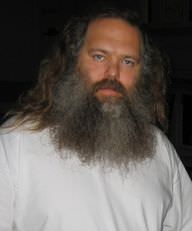 His reputation in the music hip hop scene is one to reckon with as he is known to have driven a lot of successful artists into the spotlight, some of them include; LL Cool J, Public Enemy, Geto Boys, Beastie Boys, and more.

Some other top artistes in which he has worked with include; Kanye West, Adele, Johnny Cash, Justin Timberlake, Kendrick Lamar, The Strokes, and more. He was born Frederick Rubin.

His parents are father, Michael Rubin, while his mother is Linda Rubin. He is noted to have been engaged to Mourielle Herrera. It is known that Rubin has a son.

Rubin was awarded the "Producer of the Year, Non-Classical" at the 2009 Grammy Awards.

Rick Rubin is a famous American record producer, who was born on March 10, 1963. As a person born on this date, Rick Rubin is listed in our database as the 90th most popular celebrity for the day (March 10) and the 329th most popular for the year (1963).

People born on March 10 fall under the Zodiac sign of Pisces, the Fish. Rick Rubin is the 2707th most popular Pisces.

Aside from information specific to Rick Rubin's birthday, Rick Rubin is the 16368th most famous American and ranks 39th in famous people born in Long Island, New York, U.S.

In general, Rick Rubin ranks as the 32325th most popular famous person, and the 58th most popular producer of all time. “The Famous Birthdays” catalogs over 25,000 famous people, everyone, from actors to actresses to singers to tiktok stars, from serial killers to chefs to scientists to youtubers and more. If you're curious to see who was born on your birthday, you can use our database to find out who, what, where, when and why. You can search by birthday, birthplace, claim to fame or any other information by typing in the search box, or simply browse our site by selecting the month, the day, the horoscope, or any other clickable option.