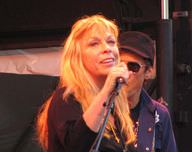 Rickie Lee Jones has been described by many experts as one of the greatest American female musicians of all-time. A versatile singer, the American has produced many hit songs which cut across genres like jazz, pop and R&B.

She started attracting attention in 1979 when she released her eponymous maiden album. Since then, the multiple award-winning songstress has issued many successful albums which include “Pirates”, “Flying Cowboys” and “Traffic from Paradise”.

She’s the granddaughter of vaudeville performer Frank Jones, popularly known as "Peg Leg". Her parents are Bettye and Richard Jones. She was raised alongside three siblings named Pamela Jo, Janet Adele and Daniel.

In 1988, she became the wife of Pascal Nabet Meyer. Before that, she was in a relationship with American entertainer Tom Waits.

Jones won the “Best New Artist” prize at the 1980 Grammy Award. The singer won another Grammy in 1989 for her version of the song titled "Makin' Whoopee", which featured Dr. John. She was named in the “100 Greatest Women in Rock & Roll” list which was compiled by VH1 in 1990.

Before rising to fame, she performed at local coffee houses and bars.

Her voice was used in the 1987 animated film titled “Pinocchio and the Emperor of the Night”.

She has also worked with some popular musicians like Leo Kottke and Dan Hicks.

Where is Rickie Lee Jones from?