He is a former British professional football player. During his footballing career, he played as a center-back. He was capped about 81 times for his English National Team, between 1997 and 2011.

He played for several youth teams during the inception of his career. He would later settle at West Ham United where he gradually rose through the ranks and made his debut in the professional Premier League in 1996.

He was born to an Irish mother. His mother's name is Janice Lavender and his dad is Julian Ferdinand. From 2009 to 2015, he was married to Rebecca Ellison. Sadly Rebecca, 34, passed away in 2015. The couple had three children – Lorenz, Tia and Tate. In 2019, he got married to Kate Wright.

He won the "Premier League Player of the Month" in October of 2001.

He was inducted into "London Youth Games: Hall of Fame" in 2010

In 2017, he ventured into boxing but was refused a license.

He was present in England’s FIFA World Cup squad 3 times.

He used to take part in gymnastics, drama, ballet and theatre when he was young.

Title
Rio Ferdinand, English footballer. Plays in the defender position for Manchester United in the FA Premier League and at the international level for the England national football team. Taken in Belfast in 2004.
Author
John Dempsey
Source
http://commons.wikimedia.org/wiki/File:Rio_Ferdinand,_2004.jpg
License
CC BY 2.0 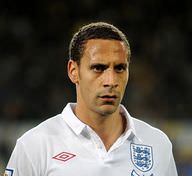 There is a huge responsibility on all of us to get England through. It would be one of the biggest disasters in sports history if we blew it and we must make sure it does not happen.Rio Ferdinand

People born on November 7 fall under the Zodiac sign of Scorpio, the Scorpion. Rio Ferdinand is the 498th most popular Scorpio.

In general, Rio Ferdinand ranks as the 5726th most popular famous person, and the 93rd most popular soccer player of all time. “The Famous Birthdays” catalogs over 25,000 famous people, everyone, from actors to actresses to singers to tiktok stars, from serial killers to chefs to scientists to youtubers and more. If you're curious to see who was born on your birthday, you can use our database to find out who, what, where, when and why. You can search by birthday, birthplace, claim to fame or any other information by typing in the search box, or simply browse our site by selecting the month, the day, the horoscope, or any other clickable option.