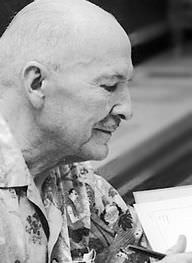 About Robert A. Heinlein

Robert A. Heinlein was an American science fiction writer whose writing career spanned almost half a century and saw him publish several dozens of novels and short stories. Some his most notable novels include 1959's Starship Troopers, 1961's Stranger in a Strange Land and 1961's The Moon Is a Harsh Mistress. His success in the science fiction genre earned him the name, "the dean of science fiction writers" as well as numerous prestigious awards.

He was married three times. His last marriage was to chemist Virginia Heinlein. He and Virginia stayed together from 1948 until his death in 1988.

In addition to being named the Science Fiction Writers of America's first Grand Master, he also won four Hugo Awards during his lifetime. In 1998, he was posthumously inducted into the Science Fiction and Fantasy Hall of Fame. In 2012, his famous science fiction novel, Stranger in a Strange Land, was included in the U.S. Library of Congress' list of "Books that Shaped America".

He and writers Arthur C. Clarke and Isaac Asimov were informally called the "Big Three" of science fiction writers.

F.A.Q. about Robert A. Heinlein

Robert's birthday is in 275 days

How old was Robert when he died?

Robert A. Heinlein would be 115 years old if he was alive today.

Where was Robert from?

He was born in Butler, Missouri, U.S..