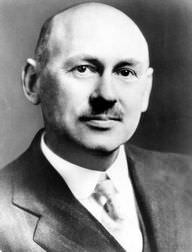 Dubbed “the father of modern rocket propulsion”, Robert H. Goddard was an American physicist, engineer, professor and inventor. He is recognized as the first person to build a rocket fuelled by liquid propellants. He has also been credited for having made significant contributions (theoretically and engineering-wise) to spaceflight. On March 16, 1926, he launched his first successful rocket. He opened the eyes of the world to the possibilities of using rockets for space travel and atmospheric research.

His parents’ names were Fannie Louise Hoyt and Nahum Danford Goddard. His younger brother, Richard died in infancy. He was married to Esther Christine Kisk, who worked as a secretary. Their marriage did not produce any children.

He was honored with a Congressional Gold Medal, a Langley Gold Medal and a Daniel Guggenheim Medal.

Robert's birthday is in 5 days

How old was Robert when he died?

Robert H. Goddard would be 139 years old if he was alive today.

Where was Robert from?

He was born in Worcester, Massachusetts, U.S..