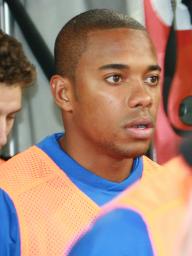 Robinho is a Brazilian professional footballer who joined the Brazil national football team in 2003. He played for teams such as Real Madrid, Manchester City, A.C. Milan and Guangzhou Evergrande before joining Atlético Mineiro in 2016.

He married Vivian Guglielmetti in 2009. The couple had their first child Robson Jr. in 2007. Their second child, Gianluca was born in 2011.

In 2004, his mother was kidnapped by armed men. She was, however, released later.

Robinho's birthday is in 351 days

Where is Robinho from?

He was born in São Vicente, Brazil.