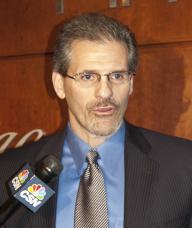 Ron Hextall is a renowned former hockey player and coach, who is popular for his family's long-time participation in the sport. His influence in the game was triggered when he was a child, thanks to his grandfather, father and uncle, who were prominent in the hockey scene.

In 1980, he officially began his career in the Saskatchewan Junior Hockey League (SJHL), under Melville Millionaires.

Over the course of his playing days, he featured for teams like Philadelphia Flyers, Quebec Nordiques, and New York Islanders. His work as a player spanned between 1984 and 1999.

Following his retirement, he joined Philadelphia Flyers as a professional scout, but was soon promoted to the position of director.

His father is former hockey player, Bryan Hextall Jr. while his mother is Fay Hextall. He has two older siblings. He got married to competitive figure skater, Diane Ogibowski – with whom he had Jeffery, Kristin, Rebecca, and hockey player, Brett Hextall.

In 1986, he received the Dudley "Red" Garrett Memorial Award.

He became a member of the Flyers Hall of Fame in 2008.

In 1987, he picked up the Vezina Trophy, Conn and Smythe Trophy. That same year, he was included in the NHL All-Rookie Team, and NHL First All-Star Team.

Hextall is 6ft 3in tall.

People born on May 3 fall under the Zodiac sign of Taurus, the Bull. Ron Hextall is the 1470th most popular Taurus.

Aside from information specific to Ron Hextall's birthday, Ron Hextall is the 639th most famous Canadian and ranks 118th in famous people born in Canada.

In general, Ron Hextall ranks as the 16572nd most popular famous person, and the 46th most popular hockey player of all time. “The Famous Birthdays” catalogs over 25,000 famous people, everyone, from actors to actresses to singers to tiktok stars, from serial killers to chefs to scientists to youtubers and more. If you're curious to see who was born on your birthday, you can use our database to find out who, what, where, when and why. You can search by birthday, birthplace, claim to fame or any other information by typing in the search box, or simply browse our site by selecting the month, the day, the horoscope, or any other clickable option.