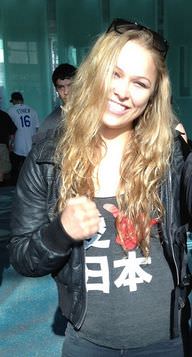 Ronda Rousey began training in Judo when she was 11. At 17, she was the youngest judoka at the 2004 Olympic Games. In the following years, she had a successful Judo career, winning several medals at various competitions. She decided to switch to MMA when she was 21. After training and a few competitions, she went pro. She competed in Strikeforce fights, becoming the Bantamweight Champion in 2012. Recently, Rousey has been the Ultimate Fighting Championship's top female bantamweight fighter. She has also acted in movies like Furious 7 and Entourage.

Ronda's birthday is in 1 day

Where is Ronda from?

She was born in Riverside County, California, U.S..