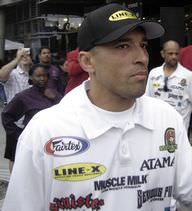 Title
Author: Jenn Gilbraith, who agreed to license this image under the terms of the en:Creative Commons Attribution-ShareAlike 3.0 license. Permission is on file with the WMF.
Author
Original uploader was East718 at en.wikipedia
Source
http://commons.wikimedia.org/wiki/File:RoyceGracie.png
License
CC BY-SA 3.0

Royce Gracie is a mixed martial art hall of famer who became a global icon after joining the Ultimate Fighting Championship in 1993. Since joining, he has participated and won a number of highly-rated tournaments including three out of four UFC series competitions that were organized between 1993 and 94.

Aside from UFC, the Brazilian fighter has also participated under several notable promotions including the PRIDE Fighting Championships, and Bellator MMA.

His dad, Helio Gracie, a former MMA fighter, was known to be the creator of the Brazilian Jiu-Jitsu. His siblings are Relson, Royce, Rickson, Royler, Robin, Rorion, and Rolker.

Until 2016, he was married to a lady known as Marianne. Before their divorce, they had four children, a daughter and three sons.

In 2003, he was inducted into the ‘UFC Hall of Fame’. Ten years later, he became a member of the ‘MMA Freak Hall of Fame’. That same year, he received a Lifetime Achievement awards at the World MMA Awards.

People born on December 12 fall under the Zodiac sign of Sagittarius, the Archer. Royce Gracie is the 2338th most popular Sagittarius.

Aside from information specific to Royce Gracie's birthday, Royce Gracie is the 222nd most famous Brazilian and ranks 38th in famous people born in Rio de Janeiro, Brazil.

In general, Royce Gracie ranks as the 30837th most popular famous person, and the 78th most popular mma fighter of all time. “The Famous Birthdays” catalogs over 25,000 famous people, everyone, from actors to actresses to singers to tiktok stars, from serial killers to chefs to scientists to youtubers and more. If you're curious to see who was born on your birthday, you can use our database to find out who, what, where, when and why. You can search by birthday, birthplace, claim to fame or any other information by typing in the search box, or simply browse our site by selecting the month, the day, the horoscope, or any other clickable option.