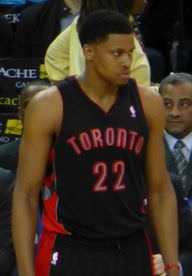 Rudy Gay is an American basketball player. He plays as a small forward for the Sacramento Kings of the NBA. He has also played for the Memphis Grizzlies and the Toronto Raptors. He was selected in the drafts by the Houston Rockets, who traded him to Memphis Grizzlies.

He won the 2010 FIBA World Championship with the national team of the United States and the 2014 FIBA Basketball World Cup .

Rudy's birthday is in 259 days

Where is Rudy from?

He was born in Baltimore, Maryland, U.S..

What is Rudy Gay's height?