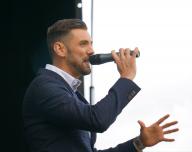 TV personality and radio presenter, Ryan Swain has gained fame for serving as a host for live events and music festivals. He has served as a presenter for Minster FM’s popular program, dubbed ‘Saturday Night Show’.

Aside from presenting, Swain is also noted for establishing a career, in 2010, as a stand-up comedian. In 2015, he gained viral fame online for his comic videos on ADHD and parenting.

He was born to Paul and Deborah Swain – he has a sibling named Trent Elliot Swain. In April of 2015, he had identical twins, Isla and Ivy, with his former partner, Natalia.

He picked up an award at the “The National Entertainment Awards” in December 2019.

He had his primary education at Norton Community Primary School. He also attended Norton College. He continued at Westwood Performing Arts Campus in Scarborough, where he studied music and drama.

He started a career as a presenter at the North Yorkshire-based Flamingo Land Resort, where he presented the resort’s popular concert, ‘Party in the Park’. He has worked as a presenter on the British free-to-air channel – Clubland TV.

At the age of four, he underwent heart surgery to correct a hole in the heart condition.

In May 2020, he embraced vegan living and has gone on to become a strong advocate of veganism. He is also a proponent of mental health awareness.

Ryan Swain is a famous English TV and radio presenter, who was born on February 24, 1990. As a person born on this date, Ryan Swain is listed in our database as the 91st most popular celebrity for the day (February 24) and the 553rd most popular for the year (1990).

People born on February 24 fall under the Zodiac sign of Pisces, the Fish. Ryan Swain is the 2780th most popular Pisces.

Aside from information specific to Ryan Swain's birthday, Ryan Swain is the 2526th most famous English.

In general, Ryan Swain ranks as the 32827th most popular famous person, and the 103rd most popular tv host / presenter of all time. “The Famous Birthdays” catalogs over 25,000 famous people, everyone, from actors to actresses to singers to tiktok stars, from serial killers to chefs to scientists to youtubers and more. If you're curious to see who was born on your birthday, you can use our database to find out who, what, where, when and why. You can search by birthday, birthplace, claim to fame or any other information by typing in the search box, or simply browse our site by selecting the month, the day, the horoscope, or any other clickable option.