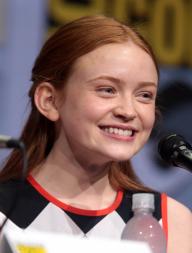 She is an American actress, who is famous for playing the role of Max Mayfield, in the movie “Stranger Things”. She featured in the series, “Blue Bloods” and “The Americans”.

Caleb, Spencer and Mitchell are her brothers. Jacey is her younger sister.

She was nominated for the “Outstanding Performance by an Ensemble in a Drama Series” at the Screen Actors Guild Awards in 2018.

Does Sadie Sink have a modeling career?

Yes. This amazing actress is also noted for establishing a career in modeling. She began modeling when she was fifteen years old.

Her first catwalk experience was at the Paris Fashion Week in 2018. In addition, Sink has modeled for several well-known brands including L'Officiel Paris, Givenchy Beauty, and Vogue.

She began her acting career at age 11.

In 2021 Sink was included as part of the cast of "The Whale". That same year, she starred as herself in "All Too Well: The Short Film", a film written and directed by Taylor Swift. The film also features Dylan O'Brien.

Sadie's birthday is in 284 days

Where is Sadie from?

She was born in Houston, Texas, U.S..