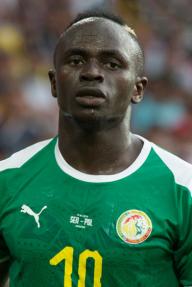 Sadio Mané is a professional soccer player from Senegal. Despite his versatility, he’s mostly played as a winger. His time with English football team, Liverpool catapulted him to fame.

He began his professional career as a teenager in France before moving to Austria in 2012 to join Red Bull Salzburg. Two years later, he joined English side, Southampton for a fee of around £11 million. After two successful years at the club, he joined another English Football club, Liverpool for £34 million.

He was part of the Liverpool team that won the UEFA Champions League, UEFA Super Cup, and the FIFA Club World Cup in 2019.

He has represented his country, on numerous times, in the African Cup of Nations. He’s also played in some major international tournaments for his nation including the FIFA World Cup.

At the end of the 2018-19 soccer season, the Senegalese won the Premier League Golden Boot award together with teammate, Mohammed Salah, and Piere-Emerick Aubameyang. That same season, he was included in the UEFA Team of the Year, and also won the African Footballer of the Year award.

His three goals for Southampton against Aston Villa in 2015 were recorded as the fastest hat-trick to have been scored in the history of the English Premier League.

Sadio Mané is a famous Senegalese footballer, who was born on April 10, 1992. As a person born on this date, Sadio Mané is listed in our database as the 37th most popular celebrity for the day (April 10) and the 182nd most popular for the year (1992).

People born on April 10 fall under the Zodiac sign of Aries, the Ram. Sadio Mané is the 868th most popular Aries.

Aside from information specific to Sadio Mané's birthday, Sadio Mané is the 3rd most famous Senegalese.

In general, Sadio Mané ranks as the 9209th most popular famous person, and the 94th most popular footballer of all time. “The Famous Birthdays” catalogs over 25,000 famous people, everyone, from actors to actresses to singers to tiktok stars, from serial killers to chefs to scientists to youtubers and more. If you're curious to see who was born on your birthday, you can use our database to find out who, what, where, when and why. You can search by birthday, birthplace, claim to fame or any other information by typing in the search box, or simply browse our site by selecting the month, the day, the horoscope, or any other clickable option.