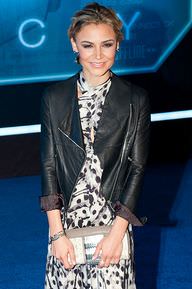 Samaire Rhys Armstrong’s first acting role was as a guest character in an episode of “Party of Five” in 2000. Arguably known best for her recurring appearances as Anna Stern in fifteen episodes of the teen drama series “The O.C.” from 2003 to 2006, she is also recognized for playing the role of Nell Bedworth in the romantic comedy film, “It’s a Boy Girl Thing”.

Her mother, Sylvia Sepielli, is Italian while her father, Hunter Armstrong, is Scottish. She spent the first five years of her life in Japan. She was later raised in Hawaii and Arizona. She has a son with “Corey Taylor” bassist, Jason Christopher, her ex-boyfriend.

She caused controversy in September 2020 when she declared her support for Donald Trump and called the Black Lives Matter movement a “terrorist organization”.

Samaire Armstrong's birthday is in 29 days

Where is Samaire Armstrong from?

She was born in Tokyo, Japan.