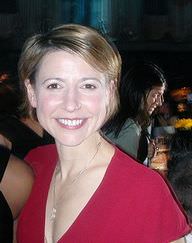 Samantha Brown is a well-known American television personality who has gained global recognition as the host of Travel Channel’s "Passport to Europe". She has also appeared on television shows like "Great Weekends," and "Passport to Latin America". During the early stages of his career she appeared in many advertisements most notably as the Century Cable spokeswoman "Wendy Wire".

She is of German and Scottish ancestry.

She became a successful businesswoman after launching her own luggage and travel accessory brand.

Samantha's birthday is in 51 days

Where is Samantha from?