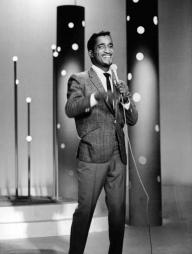 He was an American legendary actor, singer, musician, vaudevillian, comedian, dancer and activist. He started off his career in vaudeville right from the age of three where he toured the country with his father and a troupe of dancers known as Will Mastin Trio.

His parents are Sammy Davis Sr. and Elvera Sanchez. He married Loray White in 1958 and their marriage spanned for about a year before they divorced in 1959.

His children include Manny, Tracey, Mark and Jeff.

He was inducted into the Grammy Hall of Fame Awards in 2002.

He won the posthumous Grammy Lifetime Achievement Award in 2001.

He got nomination at the 1977 Golden Globe Awards for "Best TV Actor - Musical/Comedy".

Though he was successful, he always stayed in "Black Only" hotels due to racism.

When he clocked 29 in 1954, he was involved in a fatal accident, which resulted in him losing one of his eyes.

Some years down the line, he chose to convert to Judaism as a result of the oppression exercised against African Americans and the Jews.

How old was Sammy Davis Jr. when he died?

Sammy Davis Jr. would be 95 years old if he was alive today.

Where was Sammy Davis Jr. from?

People born on December 8 fall under the Zodiac sign of Sagittarius, the Archer. Sammy Davis Jr. is the 378th most popular Sagittarius.

In general, Sammy Davis Jr. ranks as the 4712th most popular famous person, and the 659th most popular actor of all time. “The Famous Birthdays” catalogs over 40,000 famous people, everyone, from actors to actresses to singers to tiktok stars, from serial killers to chefs to scientists to youtubers and more. If you're curious to see who was born on your birthday, you can use our database to find out who, what, where, when and why. You can search by birthday, birthplace, claim to fame or any other information by typing in the search box, or simply browse our site by selecting the month, the day, the horoscope, or any other clickable option.