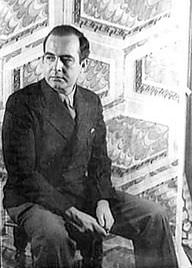 Samuel Barber was a renowned and celebrated music composer from America. He was musically talented and gifted. Barber was trained and coached by Sidney Homer for almost 30 years. He was noted for his unique skills. He made different compositions including Orchestral, piano, violin, and opera music. Among his notable compositions were “The School for Scandal”, “Cello Sonata”, “Sonata for Piano” and “Antony and Cleopatra”.

He studied at West Chester High School, Curtis Institute of Music, and the American Academy in Rome.

He was the offspring of Samuel L. R. Barber and Marguerite McLeod.

Barber’s mom was a pianist, and his dad, a physician.

At age 9, he wrote a letter to his mother telling her that he was born to be a composer and not a footballer.

He wrote “The Rose Tree”, his debut operetta at age 10.

Barber was an organist at age 12.

In 1946, he received a Guggenheim Fellowship grant.

Samuel's birthday is in 50 days

How old was Samuel when he died?

Samuel Barber would be 111 years old if he was alive today.

Where was Samuel from?

He was born in West Chester, Pennsylvania, U.S..

Samuel Barber was a famous American composer, who was born on March 9, 1910. As a person born on this date, Samuel Barber is listed in our database as the 52nd most popular celebrity for the day (March 9) and the 20th most popular for the year (1910).

People born on March 9 fall under the Zodiac sign of Pisces, the Fish. Samuel Barber is the 1406th most popular Pisces.

Aside from information specific to Samuel Barber's birthday, Samuel Barber is the 10959th most famous American and ranks 8th in famous people born in West Chester, Pennsylvania, U.S.

In general, Samuel Barber ranks as the 18422nd most popular famous person, and the 92nd most popular songwriter / composer of all time. “The Famous Birthdays” catalogs over 40,000 famous people, everyone, from actors to actresses to singers to tiktok stars, from serial killers to chefs to scientists to youtubers and more. If you're curious to see who was born on your birthday, you can use our database to find out who, what, where, when and why. You can search by birthday, birthplace, claim to fame or any other information by typing in the search box, or simply browse our site by selecting the month, the day, the horoscope, or any other clickable option.