Samuel Eto’o is a retired professional footballer of Cameroonian descent. He is famous for his striking prowess as a player. He is rated as one of the best African footballers of all time by most football pundits.

He married Georgette in 2007. His children include Siena, Lynn, Étienne, and Maelle. His brothers, David and Étienne Eto’o, are professional footballers.

He was the recipient of the Golden Foot award in 2015.

He helped his national team, Cameroon, to win the African Cup of Nations in 2000 and 2002.

As of January 2020, he is the African Cup of Nations all-time top goal scorer.

He played alongside Brazilian football legend, Ronaldinho from 2004 to 2008 at FC Barcelona. He has also played together with Argentine football maestro, Lionel Messi. 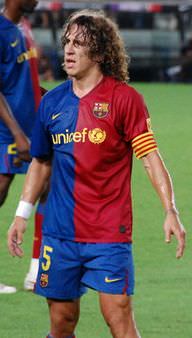 People born on March 10 fall under the Zodiac sign of Pisces, the Fish. Samuel Eto'o is the 197th most popular Pisces.

Aside from information specific to Samuel Eto'o's birthday, Samuel Eto'o is the 1st most famous Cameroonian.

In general, Samuel Eto'o ranks as the 2427th most popular famous person, and the 39th most popular soccer player of all time. “The Famous Birthdays” catalogs over 25,000 famous people, everyone, from actors to actresses to singers to tiktok stars, from serial killers to chefs to scientists to youtubers and more. If you're curious to see who was born on your birthday, you can use our database to find out who, what, where, when and why. You can search by birthday, birthplace, claim to fame or any other information by typing in the search box, or simply browse our site by selecting the month, the day, the horoscope, or any other clickable option.