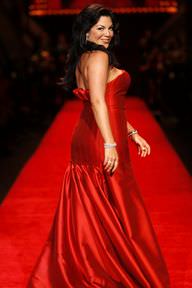 Sara Ramirez is a renowned Mexican-born American actress and singer famous for starring in the hit medical drama television series Grey's Anatomy, in which she played the role of Dr. Callie Torres. Her other notable works include playing The Lady of the Lake in the popular Broadway musical Spamalot and voicing the character Queen Miranda on the computer-animated television series Sofia the First.

In 2012, she and her longtime boyfriend Ryan DeBolt tied the knot.

Throughout her career, she has won a number of awards, including a Tony Award and an Outer Critics Circle Award in 2005 for her performance in the Broadway musical Spamalot.

She speaks both English and Spanish fluently.

Her debut EP titled Sara Ramirez was released in 2011.

When is Sara's birthday?

In how many days is Sara's birthday?

Sara's birthday is in 335 days

How old is Sara?

Where is Sara from?