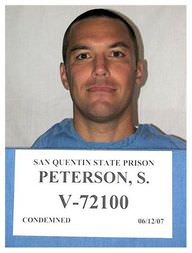 Scott Peterson is an American murderer. He killed his wife and their unborn son in California in 2002. He was convicted of first-degree murder and second degree murder in 2004 and he was eventually sentenced to death by lethal injection in 2005. He remains on death row in San Quentin State Prison. His case is on appeal to the Supreme Court of California.

His wife was reported missing in December 2002 by Peterson and his story attracted media interest all around the United States.

He was born in San Diego in 1972. Before his conviction, he was a salesman.

Scott's birthday is in 258 days

Where is Scott from?