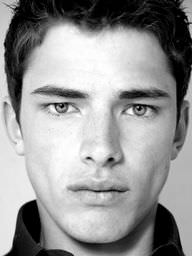 He is an American supermodel, who was discovered on MySpace by late American model manager, Nolé Marin. After their encounter, he began landing huge deals with top brands. He has been privileged to work for several top brands such as in editorials and advertising campaigns. Some of the brands with whom he has worked for include Versace, Calvin Klein, Dolce & Gabanna, H&M, Ralph Lauren, Armani, Lacoste, Fendi, JOOP, and many others.

His parents are father, John O'Pry and mother, Caran O'Pry. His siblings include; Chris and Shannon O'Pry.

He is noted to have been romantically involved with Romanian model, Diana Moldovan between 2009 and 2012 and Chinese model, Moldovan Ming Xi between 2012 and 2013.

He was named "world's most successful male model" in 2009 by Forbes.

He was declared the "most successful male model in the world" by Models.com in 2013.

He participated in baseball, track and field, basketball, and football while in high school.

Sean's birthday is in 252 days

He was born in Kennesaw, Georgia, U.S..

What color are his eyes?

What is Sean O'Pry's height?

People born on July 5 fall under the Zodiac sign of Cancer, the Crab. Sean O'Pry is the 316th most popular Cancer.

Aside from information specific to Sean O'Pry's birthday, Sean O'Pry is the 2591st most famous American.

In general, Sean O'Pry ranks as the 3897th most popular famous person, and the 89th most popular model of all time. “The Famous Birthdays” catalogs over 40,000 famous people, everyone, from actors to actresses to singers to tiktok stars, from serial killers to chefs to scientists to youtubers and more. If you're curious to see who was born on your birthday, you can use our database to find out who, what, where, when and why. You can search by birthday, birthplace, claim to fame or any other information by typing in the search box, or simply browse our site by selecting the month, the day, the horoscope, or any other clickable option.