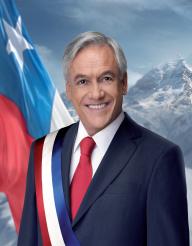 Sebastián Piñera has been a successful businessman before venturing into politics. He gained national fame in the 1980s when he was named as Banco de Talca’s general manager. He has also invested in other well-known organizations like LAN Airlines, and Chilevisión.

Piñera decided to go into politics in 1988 after the reign of Chilean leader Augusto Pinochet came to an end. Known to be a prominent figure in the National Renewal Party, he was elected as Eastern Santiago’s Senator in 1990 and served in that position for eight years.

In 2001, his party selected him to manage their administrative affairs. He surprised the world when he announced his intention to run for the presidential election in 2005. He lost to Michelle Bachelet, but came back to win the seat in 2009

He sought re-election in 2013 but was unsuccessful. He was sworn into office again in 2018 after beating Alejandro Guillier in the presidential election which was held a year before.

He graduated from Pontifical Catholic University of Chile in 1971 and continued at Harvard University.

Piñera has received many medals including the Order of Bernardo O'Higgins, and Spain’s Order of Isabella the Catholic.

Sebastián Piñera's birthday is on December 1, 1949.

Sebastián's birthday is in 114 days

Where is Sebastián from?

He was born in Santiago, Chile.