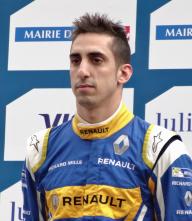 Sebastien Buemi is the cousin of the Swiss racer Natasha Gachnang.

He began a marital relationship with Jennifer Buemi in 2015 and together they have two sons.

After Buemi had completed the Kart racing, he spent a few years with the junior racing formula, Formula BMW before participating in the 2005 Spanish Formula Three competition. He made his first win in Kart racing in 1998 during the Swiss championship.

He has participated in other championships like the A1 Grand Prix, GP2 Series, Formula One and Formula E.Buemi has also raced for teams such as Toyota Gazoo Racing, Envision Racing and Toro Rosso.

Sébastien Buemi's birthday is in 29 days

Where is Sébastien Buemi from?

He was born in Aigle, Vaud, Switzerland.