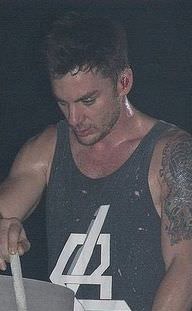 Shannon Leto, a multi-talented American musician and songwriter, is most known for his aggressive drumming technique and explosive live performances. He is also renowned as the co-founder of the rock band Thirty Seconds to Mars.

The above-noted band became internationally acclaimed after the release of their second studio album "A Beautiful Lie”.

Besides his stint with the band, he also works on other projects including performances with the punk rock band Street Drum Corps. He has also done several recordings with the band The Wonder Girls, and has collaborated with a number of acts including Antoine Becks.

The songwriter was born to Constance Leto and Carl Leto. He was raised together with a brother called Jared Leto.

Aside from his profession as a musician he also works as a photographer.

He plays the piano and the guitar.

He acquired his first drum set at the age of eight.

His father committed suicide when he was ten years old.

He dropped out of school because of drug addiction.

He started a romantic relationship with American actress Cara Santana.

Shannon's birthday is in 94 days

Where is Shannon from?

He was born in Bossier City, Louisiana, U.S..