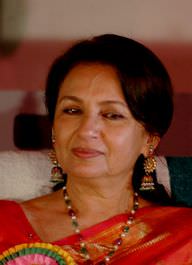 She is a retired Indian actress, who is prominent for her massive contributions to the Hindi cinema and also the Bengali cinema.

Between October of 2004 and March of 2011, Sharmila Tagore headed the Indian Film Censor Board. Due to her works and remarkable achievements, she was appointed UNICEF Goodwill Ambassador in 2005. She went ahead to feature as an international jury at the Cannes Film Festival in 2009.

Her father, Gitindranath Tagore was a general manager at the British India Corporation. Her mother is Ira Tagore. Her siblings include Oindrila Kunda and Romila Sen.

She got married to former Indian cricketer, Mansoor Ali Pataudi in 1969 and they both stayed married till his death in 2011. Her children include; Indian actor, Saif Ali Khan, jewellery designer, Saba Ali Khan, and TV personality and Bollywood actress, Soha Ali Khan.

She received the "Outstanding Achievement in Cinema" at the 2011 Special Awards.

Tagore was named the "Best Supporting Actress" at the 1976 Silver Lotus Awards.

She won the "Beauty Legend" award at the 2019 Vogue Beauty Awards.

When she got married, she converted to Islam and was renamed "Ayesha Sultana Khan".

Tagore made her acting debut at 13.

Sharmila Tagore's birthday is on December 8, 1944.

Sharmila Tagore's birthday is in 134 days

Where is Sharmila Tagore from?

She was born in Hyderabad, Andhra Pradesh, India.

People born on December 8 fall under the Zodiac sign of Sagittarius, the Archer. Sharmila Tagore is the 2418th most popular Sagittarius.

Aside from information specific to Sharmila Tagore's birthday, Sharmila Tagore is the 476th most famous Indian and ranks 5th in famous people born in Hyderabad, Andhra Pradesh, India.

In general, Sharmila Tagore ranks as the 32561st most popular famous person, and the 3365th most popular actress of all time. “The Famous Birthdays” catalogs over 40,000 famous people, everyone, from actors to actresses to singers to tiktok stars, from serial killers to chefs to scientists to youtubers and more. If you're curious to see who was born on your birthday, you can use our database to find out who, what, where, when and why. You can search by birthday, birthplace, claim to fame or any other information by typing in the search box, or simply browse our site by selecting the month, the day, the horoscope, or any other clickable option.