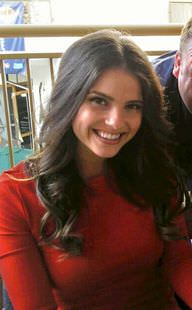 She is an American actress and model, who broke into limelight in 2004 when she was named 'Miss Teen USA', the same year. She earned her debut significant role when she was casted for the American daytime soap opera, "Days of Our Lives" where she appeared as Stephanie Johnson – a performance which earned her several accolades and multiple Daytime Emmy Award nominations.

Following her exit from the aforementioned series, she went ahead to feature in the 2011 - 2012 American supernatural fantasy film drama, "The Secret Circle" where she played Diana Meade.

She won the "Choice Summer TV Star: Female" at the 2016 Teen Choice Awards.

She picked up a nomination for the award category in "Outstanding Younger Actress" at the 2010 and 2012 Daytime Emmy Awards.

She got nominated for the "Younger Actress - Daytime Drama" at the 2010 Gold Derby TV Awards.

She is a professional dancer.

She was the first lady from Louisiana to be adjudged the winner of the 'Miss Teen USA' title.

Her brother died in a drunk-driving incident 3 years before she won her pageantry title.

Shelley's birthday is in 147 days

Where is Shelley from?

She was born in Metairie, Louisiana, U.S..