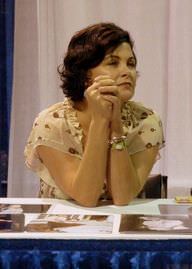 Fenn is an American who is prominent for being an outstanding actress.  She actually rose to prominence when she appeared on the series, "Twin Peaks" (1990 - 1991, 2017), where she played the role of "Audrey Horne". The series became a great success as it got nominated at the Golden Globe awards and also at the Emmys.

She was born to father, Leo Fenn who is  known for being the manager of rock bands such as "The Pleasure Seekers", "The Billion Dollar Babies" and "Alice Cooper".

Her mother is the sensational keyboard player, Arlena Quatro. Her aunty is noted to be the renowned American rock singer, songwriter and actress, Suzi Quatro.

Her grandfather was the popular jazz musician, Art Quatro. She is noted to have been romantically involved with top celebrities such as Prince and Johny Depp. She was married to Toulouse Holliday between 1994 and 1997. She began dating Dylan Stewart in 2006. Her children include; Myles Holliday and Christian Stewart.

She got nominated for the "Outstanding Supporting Actress in a Drama Series" at the 1990 Emmy Awards.

Fenn was also nominated for the "Best Performance by an Actress in a Supporting Role in a Series, Mini-Series or Motion Picture Made for TV" at the 1991 Golden Globe Awards.

She quit junior school to chase her acting career.

Sherilyn's birthday is in 361 days

Where is Sherilyn from?

She was born in Detroit, Michigan, U.S..