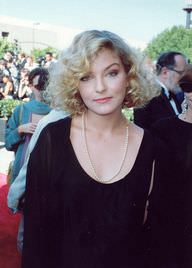 The German-American actress, Sheryl Lee is known for her stage works. Her first film role was in the cult TV series titled “Twin Peaks” in 1990.

She was raised in Boulder, USA. She studied at Fairview High School.  After completing high school, she furthered her studies at the American Academy of Dramatic Arts, the North Carolina School of the Arts, the National Theatre Conservatory and the University of Colorado. After her studies, she staged a lot of plays in Washington, USA.

During the beginnings in her acting career, she starred in quite a number of films including “Wild at Heart” in 1990, “prequel Twin Peaks: Fire Walk with Me” and “Jersey Girl” in 1992.

She got married to Jesse Diamond. She had a son called Elijah Diamond. In 1994, she was diagnosed with neutropenia, a blood disorder disease.

She was honored at the Sundance Film Festival with “Spirit of Sundance Award” in 1995. Again, she won Fangoria Chainsaw Awards for “Best Supporting Actress” in 1999. In 2010, she won awards from Detroit Film Critics Society award and the Gotham Independent Film Awards.

She was present at the 25th Annual People's Choice Awards in 1999.

In 2011, she assisted Tom Weis, an environmental activist, to promote "Ride for Renewables", a renewable energy campaign.

I'm fascinated with all kinds of religion, but I'm not committed to any specific one.Sheryl Lee

Sheryl's birthday is in 144 days

Where is Sheryl from?

She was born in Augsburg, Germany.

Sheryl Lee is a famous American actress, who was born on April 22, 1967. As a person born on this date, Sheryl Lee is listed in our database as the 50th most popular celebrity for the day (April 22) and the 153rd most popular for the year (1967).

People born on April 22 fall under the Zodiac sign of Taurus, the Bull. Sheryl Lee is the 1514th most popular Taurus.

Aside from information specific to Sheryl Lee's birthday, Sheryl Lee is the 10558th most famous American and ranks 1st in famous people born in Augsburg, Germany.

In general, Sheryl Lee ranks as the 17684th most popular famous person, and the 2094th most popular actress of all time. “The Famous Birthdays” catalogs over 40,000 famous people, everyone, from actors to actresses to singers to tiktok stars, from serial killers to chefs to scientists to youtubers and more. If you're curious to see who was born on your birthday, you can use our database to find out who, what, where, when and why. You can search by birthday, birthplace, claim to fame or any other information by typing in the search box, or simply browse our site by selecting the month, the day, the horoscope, or any other clickable option.