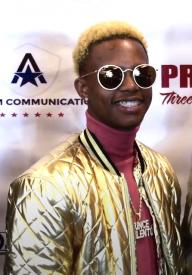 He is an American rapper, who gained international recognition in 2015, following the release of his hit song, "Watch Me (Whip/Nae Nae)", an enormously successful work, which ranked on several charts and was certified Platinum in Australia, Canada, New Zealand, Poland, U.S. and the UK.

He came out with an album named, "Fresh Outta High School" in 2018.

He is credited for having worked with top artists such as Samuel, Sophia Grace, Marcus & Martinus and Elisakh Hagia.

His song, "Watch Me (Whip/Nae Nae)" earned him the "Best Dance Performance" at the 2015 Soul Train Music Awards.

In 2017, his work on "Spotlight" landed him the "Global Collaboration Award" at the 26th Seoul Music Awards.

In 2016, he got nominated for the "YoungStar Award" at the BET Awards; he picked up a nomination for the "Top New Artist" at the Billboard Music Awards.

After being involved in several crime scandals, he was charged with murder in the killing of his cousin, in February of 2021.

Where is Silentó (Richard Lamar Hawk) from?

People born on January 22 fall under the Zodiac sign of Aquarius, the Water Bearer. Silentó (Richard Lamar Hawk) is the 153rd most popular Aquarius.

In general, Silentó (Richard Lamar Hawk) ranks as the 1955th most popular famous person, and the 102nd most popular rapper of all time. “The Famous Birthdays” catalogs over 40,000 famous people, everyone, from actors to actresses to singers to tiktok stars, from serial killers to chefs to scientists to youtubers and more. If you're curious to see who was born on your birthday, you can use our database to find out who, what, where, when and why. You can search by birthday, birthplace, claim to fame or any other information by typing in the search box, or simply browse our site by selecting the month, the day, the horoscope, or any other clickable option.