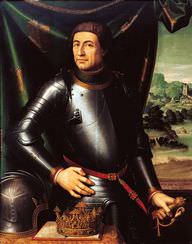 Skanderbeg was captured and made a servant in the Ottoman court in 1415. He was later trained by the Empire’s military and served for twenty years. Due to his performance, he was made the military leader of Sanjak of Dibra.

In 1443, during the Crusade of Varna, he left the Ottoman Empire and became the leader of some towns found in modern day North Macedonia, and Albania. Skanderbeg is best known for his 25-year long war against the then powerful Ottoman Empire. He was also named the leader of Pope Pius II’s army in 1463, and participated in the infamous Ottoman–Venetian War later that year where he fought against the Ottomans.

“The Great Warrior Skanderbeg”, a 1953 film which was based on his life, won an award at the Cannes Film Festival in 1953.

He was captured in William Havard's 1733 book titled “Scanderbeg, A Tragedy”.

Skanderbeg's birthday is in 214 days

How old was Skanderbeg when he died?

Where was Skanderbeg from?

He was born in Principality of Kastrioti, modern day Albania.