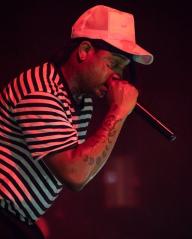 About Ski Mask the Slump God

Ski Mask the Slump God, born Stokely Clevon Goulbourne is an Afro-American rapper and songwriter who rose to prominence through his fast, catchy and playful rap tunes and the release of his successful hit song, “Catch Me Outside on Soundcloud”.

He signed a deal with Republic Records and released his commercial mixtape, YouWillRegret in 2017.

His father was a rapper known as “Sin City”.

Drown in Designer, released in 2016 was his first mixtape, and included singles such as “Take a Step Back”, which was certified Gold by the RIAA.

He was listed as one of XXL’s 2018 Freshman Class.

In 2014, he was held in a juvenile center for possessing marijuana.

Following his release from the juvenile center, he, together with XXXTentacion formed the hip-hop group “Very Rare”, and released his first single, “Catch Me Outside on Soundcloud”.

He suffered a heart disease that required him to go through surgery in March 2018.

Ski Mask the Slump God's birthday is in 287 days

Where is Ski Mask the Slump God from?

He was born in Broward County, Florida, United States.