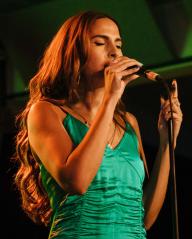 She is a Swedish singer and songwriter, who is noted for her 2017 debut album called "Feels". She backed it up with another astonishing album, "Those Feels Again", which was dropped in 2019.

She was born Shahrzad Fooladi but she is professionally known by most people as "Snoh Aalegra".

Fooladi was born to parents who are of Persian origin. She is noted to have been romantically involved with American actor and producer, Michael B Jordan.

She was awarded the "Soulpris" award at the 2019 Skap Awards.

Fooladi earned a nomination for the "Best Soul/Pop Artist" at the 2015 Scandinavian Soul Music Awards.

She got nominated for the "Album of the Year" and Artist of the Year at the 2020 Grammy Awards.

People born on September 13 fall under the Zodiac sign of Virgo, the Virgin. Snoh Aalegra is the 2618th most popular Virgo.

Aside from information specific to Snoh Aalegra's birthday, Snoh Aalegra is the 153rd most famous Swedish.

In general, Snoh Aalegra ranks as the 29044th most popular famous person, and the 2724th most popular singer of all time. “The Famous Birthdays” catalogs over 25,000 famous people, everyone, from actors to actresses to singers to tiktok stars, from serial killers to chefs to scientists to youtubers and more. If you're curious to see who was born on your birthday, you can use our database to find out who, what, where, when and why. You can search by birthday, birthplace, claim to fame or any other information by typing in the search box, or simply browse our site by selecting the month, the day, the horoscope, or any other clickable option.