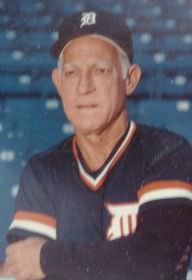 He was the first manager to lead a National League and an American League team to World Series victory. He received his induction into the Baseball Hall of Fame in 2000. On two occasions, he was named American League Manager of the Year.

The Cincinnati Reds retired his jersey no. 10. Similarly, his no. 11 was retired by the Detroit Tigers in 2011.

He graduated from Los Angeles' Susan Miller Dorsey High School. He was signed as an amateur free agent by the Brooklyn Dodgers in 1953 after graduation.

Before being called up to the main leagues to play second base for the Philadelphia Phillies in 1959, he spent six years competing in baseball's minor leagues.

At the age of 30, he assumed managerial duties in Toronto. He contributed to the Cincinnati Reds' 1975 and 1976 back-to-back World Series victories.

Midway through 1979, after being released by the Reds during the previous season, he signed with the Tigers.

Sparky Anderson's birthday is in 17 days

How old was Sparky Anderson when he died?

Sparky Anderson would be 88 years old if he was alive today.

Where was Sparky Anderson from?

He was born in Bridgewater, South Dakota, U.S..