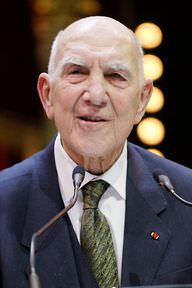 Stéphane Hessel was a German-born French concentration camp survivor, writer, French Resistance member and diplomat remembered for his 2010 book Time for Outrage!, which sold millions of copies around the world and inspired a number of political movements, including the Occupy Wall Street movement.

He was the son of Helen Grund and renowned writer and journalist Franz Hessel. He was married twice. From 1939 to 1986, he was married to his first wife Vitia Guetzevich, with whom he fathered three children. His second marriage was to Christiane in 1987. He and Christiane remained together until his death in 2013.

While working for the French intelligence service BCRA during the Second World War, he was captured by the Nazis and sent to a number of concentration camps, where he was severely tortured. After two attempts, he succeeded in escaping from the Nazis and fled to Paris.

Stéphane's birthday is in 259 days

How old was Stéphane when he died?

Stéphane Hessel would be 105 years old if he was alive today.

Where was Stéphane from?

He was born in Berlin, Germany.