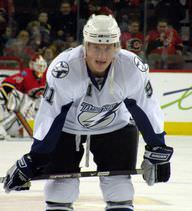 Canadian professional ice hockey player Steven Stamkos played in the Ontario Hockey League (OHL) from 2006 until his draft into the National Hockey League (NHL) in 2008. He was selected by the Tampa Bay Lightning as first overall and made his debut in the league in the 2008/09 season. At a stage in his career, he held the record for the NHL’s leading scorer amongst players born in the 1990s. He has represented Canada in international competitions as well, including the 2009 World Championship.

He was raised in Unionville, Ontario. He married Sandra Porzio, who had been his girlfriend of several years, in 2017.

He has been the recipient of awards and honors such as the NHL’s Maurice Richard Trophy and Stanley Cup as well as the OHL’s Jack Ferguson Award and Bobby Smith Trophy.

He has endorsed brands such as Nike, Tissot watches and Sport Chek. 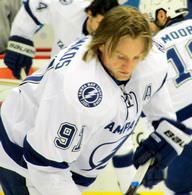 Steven's birthday is in 124 days

He was born in Markham, ON, Canada.

What is Steven Stamkos' height?