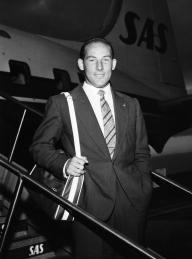 Stirling Moss was a legendary British car racing driver who rose to international prominence for his outstanding skill in Formula 1 motor racing. Although Moss’ adeptness in the sport cannot be questioned, he was unable to win the world championship. As such, he is widely regarded as one of the greatest F1 racing drivers never to win a World Drivers’ Championship.

Moss, whose career spanned for more than ten years – between 1948 and 1962, made his first entry as a Formula 1 motor racing driver at the Swiss Grand Prix in May 1951. His last entry was at the United States Grand Prix that was held in October 1961.

He took part in other major F1 motor racing events including the British Grand Prix of 1955 and the German Grand Prix that was held in 1961.

He was born to Aileen and Alfred Moss, who was a dentist and also an amateur car racing driver. His junior sister is called, Pat Moss.

In 1957, he tied the knot with Katie Moss – however, their union ended two years later. He was married to Elaine Barberino between 1964 and 1968. He got married to Susie Moss in 1980 – their union lasted for several decades until his death in 2020.

His children are Allison Bradley and Elliot Moss.

He became an “International Motorsports Hall of Fame” inductee in the year 1990. Moss was knighted in the year 2000 by Prince Charles.

For his exceptional skill in the sport, he was given the Segrave Trophy in 2005.

At the age of nine, he had begun learning how to drive a car.

Moss published several autobiographies before his death, in April 2020. They include “In the Track Of Speed”, which was published in 1957 and “My Racing Life” in 2015.

He was proven guilty in 1960 for the offence of dangerous driving. He subsequently received a one year ban from driving and was also slapped with a £50 fine.

Aside from motor racing, Moss was also good at horse racing.

He received his education at Shrewsbury House School.

Stirling Moss' birthday is in 291 days

How old was Stirling Moss when he died?

Stirling Moss would be 92 years old if he was alive today.

Where was Stirling Moss from?

People born on September 17 fall under the Zodiac sign of Virgo, the Virgin. Stirling Moss is the 1641st most popular Virgo.

Aside from information specific to Stirling Moss' birthday, Stirling Moss is the 1724th most famous English and ranks 36th in famous people born in London, UK.

In general, Stirling Moss ranks as the 18667th most popular famous person, and the 47th most popular race driver of all time. “The Famous Birthdays” catalogs over 40,000 famous people, everyone, from actors to actresses to singers to tiktok stars, from serial killers to chefs to scientists to youtubers and more. If you're curious to see who was born on your birthday, you can use our database to find out who, what, where, when and why. You can search by birthday, birthplace, claim to fame or any other information by typing in the search box, or simply browse our site by selecting the month, the day, the horoscope, or any other clickable option.