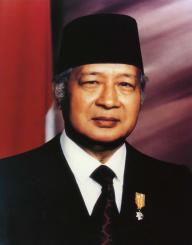 Suharto established his name in the history of Indonesia as the country’s longest serving president. He took over the presidency after a coup d’etat in 1967 and ruled for over three decades. He would be remembered for introducing the "de-Sukarnoization" campaign which sought to minimize the influence of his predecessor, Sukarno.

Mostly described as a dictator, Suharto labelled his tenure as the "New Order". He’s credit for improving the economy, educational, and manufacturing sector of the country.

In 1940, he joined the Royal Netherlands East Indies Army where he served as a sergeant. Three years later, he became a member of PETA which was organized by the Japanese. After the country’s independence in 1945, he was named as the deputy commander of the newly-established Indonesian army.

From 1956 to 1959, he worked as the leader of the army’s Diponegoro Division. He became the major general in 1962 and led the Operation Mandala.

He was the son of Sukirah and Kertosudiro. He was married to Siti Hartinah until her death in 1996. His children include Siti Hardiyanti Rukmana, Hutomo Mandala Putra, and Siti Hediati Hariyadi.

Throughout his service, he received many medals including Star of the Republic of Indonesia, Royal Family Order of the Crown of Brunei, and National Order of the Legion of Honour (France).

Transparency International named him at number one on its “corrupt leaders” list.

Suharto's birthday is in 192 days

How old was Suharto when he died?

Suharto would be 100 years old if he was alive today.

Where was Suharto from?

He was born in Kemusuk, Dutch East Indies.

Suharto was a famous Indonesian soldier and politician, 2nd President of Indonesia, who was born on June 8, 1921. As a person born on this date, Suharto is listed in our database as the 38th most popular celebrity for the day (June 8) and the 19th most popular for the year (1921).

People born on June 8 fall under the Zodiac sign of Gemini, the Twins. Suharto is the 1271st most popular Gemini.

Aside from information specific to Suharto's birthday, Suharto is the 12th most famous Indonesian.

In general, Suharto ranks as the 14159th most popular famous person, and the 110th most popular country president (prime minister) of all time. “The Famous Birthdays” catalogs over 40,000 famous people, everyone, from actors to actresses to singers to tiktok stars, from serial killers to chefs to scientists to youtubers and more. If you're curious to see who was born on your birthday, you can use our database to find out who, what, where, when and why. You can search by birthday, birthplace, claim to fame or any other information by typing in the search box, or simply browse our site by selecting the month, the day, the horoscope, or any other clickable option.