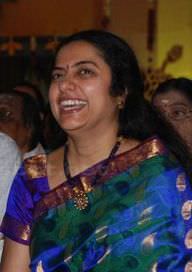 Suhasini Maniratnam is a well-known Indian actress, writer, director, and television personality best known for her works in Malayalam, Kannada, Tamil, and Telugu films. She made her film debut in the 1980 romantic drama "Nenjathai Killathe," for which she received the Tamil Nadu State Film Award for “Best Actress”.

Since then, she has been cast in a number of films and television shows including "Hendithghelthini," "President Gari Abbai," and "Apoorva Sahodarigal".

She has also host many television shows including "Hasini Pesum Padam," "Weekend with Stars," and "Bigg Boss 4

She was trained at the M.G.R. Government Film and Television Training Institute

As a director, she has worked on films like “Putham Pudhu Kaalai”, “Indira”, and “Penn”.

She has been the writer of many films like “Thiruda Thiruda”, “Ravanan”, and “Iruvar”.

The actress has also served in the Luxembourg Honorary Council.

She studied cinematography and worked as a camera assistant for acclaimed Indian filmmaker, Ashok Kumar.

Suhasini's birthday is in 294 days

Where is Suhasini from?

She was born in Chennai, Tamil Nadu, India.

People born on August 15 fall under the Zodiac sign of Leo, the Lion. Suhasini Maniratnam is the 1586th most popular Leo.

In general, Suhasini Maniratnam ranks as the 15243rd most popular famous person, and the 1819th most popular actress of all time. “The Famous Birthdays” catalogs over 40,000 famous people, everyone, from actors to actresses to singers to tiktok stars, from serial killers to chefs to scientists to youtubers and more. If you're curious to see who was born on your birthday, you can use our database to find out who, what, where, when and why. You can search by birthday, birthplace, claim to fame or any other information by typing in the search box, or simply browse our site by selecting the month, the day, the horoscope, or any other clickable option.