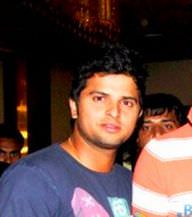 He is the son of Parvesh Raina and Tirlokchand Raina. He has four older siblings: Dinesh, Naresh, Mukesh and Renu. He married Priyanka Chaudhary in 2015.

He was a member of the Indian team that won the 2011 ICC Cricket World Cup. In addition to being the third batsman in the world to hit a T20I century, he is also the first Indian batsman to score centuries in all three formats (Test, ODI, and T20) of cricket.

He is known by the nickname "Sonu".

Suresh's birthday is in 103 days

Where is Suresh from?

He was born in Ghaziabad, India, Uttar Pradesh.