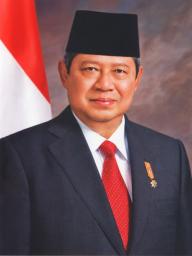 He served in the East Timor battle and in other positions before leaving in 2000 to focus on politics.

In 1999, Yudhoyono was named the Minister for Mining and Energy. The following year, he was appointed the Coordinating Minister of Politics and Security Affairs of Indonesia. A member of the Democratic Party, he became the presidential candidate of the party ahead of the elections in 2004. He won the elections and became Indonesia’s 6th President.

He was raised by his parents Siti Habibah and Soekotjo. His wife, Ani Yudhoyono, whom he married in 1976, died in 2019. The couple had two kids named Edhie Baskoro Yudhoyono, and Agus Harimurti Yudhoyono.

He had his education at the Institut Teknologi Sepuluh Nopember, the Bogor Agricultural University, and Webster University. During his time in the military, he was trained at the U.S. Army Command and General Staff College.

His character was portrayed by Pandji Pragiwaksono in the 2015 film “Di Balik 98”.

In 2009, his name appeared in the “100 Most Influential People” list which was compiled by TIME Magazine.

Where is Susilo Bambang Yudhoyono from?

He was born in Tremas, Pacitan, Indonesia.

What is Susilo Bambang Yudhoyono's height?

People born on September 9 fall under the Zodiac sign of Virgo, the Virgin. Susilo Bambang Yudhoyono is the 1404th most popular Virgo.

In general, Susilo Bambang Yudhoyono ranks as the 15784th most popular famous person, and the 133rd most popular country president (prime minister) of all time. “The Famous Birthdays” catalogs over 40,000 famous people, everyone, from actors to actresses to singers to tiktok stars, from serial killers to chefs to scientists to youtubers and more. If you're curious to see who was born on your birthday, you can use our database to find out who, what, where, when and why. You can search by birthday, birthplace, claim to fame or any other information by typing in the search box, or simply browse our site by selecting the month, the day, the horoscope, or any other clickable option.