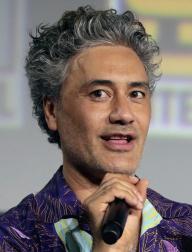 His father, Taika Waititi was an artist and farmer, while his mother, Robin Cohen was a school teacher.

He married Chelsea Winstanley and welcomed their first daughter in 2012, followed by their second daughter in August 2015.

In 1999, he and Jemaine Clement who form comedy duo, The Humourbeasts won the Billy T Award.

Taika was named as New Zealander of the Year in 2017.

During the 2020 Academy Awards, he earned a nomination for Best Picture and won the Best Adapted Screenplay for the film, Jojo Rabbit.

His self-directed film, Jojo Rabbit also earned him Best Adapted Screenplay awards at the Writers Guild of America Awards and the BAFTA Film Awards in 2020.

He starred as Adolf Hitler in the comedy film Jojo Rabbit.

At the 2005 Academy Awards, he pretended to be dozing off while the nominations were being read out.

Taika Waititi is a famous New Zealander film director and actor, who was born on August 16, 1975. As a person born on this date, Taika Waititi is listed in our database as the 66th most popular celebrity for the day (August 16) and the 171st most popular for the year (1975).

People born on August 16 fall under the Zodiac sign of Leo, the Lion. Taika Waititi is the 1621st most popular Leo.

Aside from information specific to Taika Waititi's birthday, Taika Waititi is the 23rd most famous New Zealander and ranks 6th in famous people born in Wellington, New Zealand.

In general, Taika Waititi ranks as the 15786th most popular famous person, and the 124th most popular director of all time. “The Famous Birthdays” catalogs over 25,000 famous people, everyone, from actors to actresses to singers to tiktok stars, from serial killers to chefs to scientists to youtubers and more. If you're curious to see who was born on your birthday, you can use our database to find out who, what, where, when and why. You can search by birthday, birthplace, claim to fame or any other information by typing in the search box, or simply browse our site by selecting the month, the day, the horoscope, or any other clickable option.