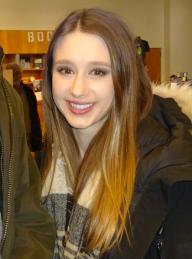 Taissa Farmiga is an American actress known for starring on a number of television series, including American Horror Story: Coven, in which she played the role of Zoe Benson. Her popular film credits include 2013's The Bling Ring, 2013's Mindscape and 2015's 6 Years.

She is the daughter of Lubomyra and Michael Farmiga. She grew up with six older siblings, including actress Vera Farmiga.

She initially never wanted to become an actress until she was persuaded by her elder sister Vera to appear in her 2011 film Higher Ground. Vera gave her a brand new Toyota pickup truck as payment for appearing in the film.

Taissa's birthday is in 324 days

Where is Taissa from?

She was born in Hunterdon County, New Jersey, U.S..