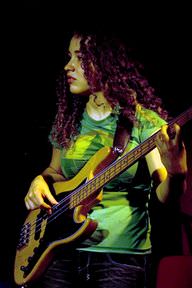 Before rising to fame, Australian singer, bassist and songwriter Tal Wilkenfeld performed in clubs in the city of New York. She later joined The Allman Brothers Band after she was persuaded by some members of the band.

Her breakthrough came in 2007 after she was selected by Chick Corea for his upcoming tour in Australia. Wilkenfeld has gone on to perform with many top musicians like Eric Clapton, Mick Jagger and Prince.

Aside from that, she is also enjoying a very successful career as a solo artiste. In 2007, she dropped her maiden studio album titled “Transformation”. She has scored other hit singles like “Corner Painter” and “Killing Me”.

She was trained at the Los Angeles Music Academy College of Music.

The Bass Player Magazine gave her the "Young Gun Award" in 2013. Five years before that, the publication voted her "The Year's Most Exciting New Player".

According to her, she enjoys standup comedy.