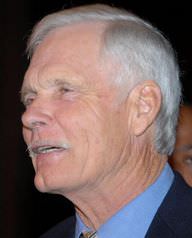 American businessman and founder of CNN

Officially named Robert Edward Turner, Ted is from Ohio, USA. He is a businessman and a Philanthropist. He is famous because he is the founder of CNN, America’s first 24-hour news channel. He is also known for establishing the Turner Broadcasting System, Inc. (TBS).

As a philanthropist, he is known for his donation of US$1 billion to the United Nations.

He married and divorced three times. First marriage was to Julia Nye. The second one was to Jane Shirley Smith, and then he married Jane Fonda, an actress.

He is a two-time Emmy Award winner. His first award was in 1989 when he was awarded the Paul White Award for Radio and Digital Television.

In 1991, he was named “Man of the Year” by Time magazine. That same year, Ted was inducted into the Television Hall of Fame.

Some of the other awards he has won comprise two Lifetime Achievements for Sports in 2014 and for News & Documentary in 2015.

He loved sailing, joining the Savannah Yacht Club and even competed in trials for Olympics in 1964.

His net worth as at January 2020 was estimated somewhere around US$2.1 billion.

He nicknames include "Captain Outrageous" and "The Mouth of the South", which where both given to him because of his fondness for making controversial statements.

In 2018, Ted revealed that he was struggling with the disease, Lewy body dementia.

Every few seconds it changes - up an eighth, down an eighth - it's like playing a slot machine. I lose $20 million, I gain $20 million.Ted Turner

I think Captain Cousteau might be the father of the environmental movement.Ted Turner

I've had the good fortune to have a much more diverse life than most people would, professional sports and television and news and movies.Ted Turner

Life is a game. Money is how we keep score.Ted Turner

My son is now an 'entrepreneur.' That's what you're called when you don't have a job.Ted Turner

Sports is like a war without the killing.Ted Turner

War has been good to me from a financial standpoint but I don't want to make money that way. I don't want blood money.Ted Turner

When I started 'CNN,' I made the decision to stay out of endorsing candidates, and let the doers make up their own minds about politics, that it wasn't going to come from me.Ted Turner

Ted's birthday is in 57 days

Where is Ted from?

He was born in Cincinnati, Ohio, U.S..

Ted Turner is a famous American businessman and founder of CNN, who was born on November 19, 1938. As a person born on this date, Ted Turner is listed in our database as the 83rd most popular celebrity for the day (November 19) and the 110th most popular for the year (1938).

People born on November 19 fall under the Zodiac sign of Scorpio, the Scorpion. Ted Turner is the 2279th most popular Scorpio.

Aside from information specific to Ted Turner's birthday, Ted Turner is the 15557th most famous American and ranks 46th in famous people born in Cincinnati, Ohio, U.S.

In general, Ted Turner ranks as the 28711th most popular famous person, and the 203rd most popular businessman / businesswoman of all time. “The Famous Birthdays” catalogs over 40,000 famous people, everyone, from actors to actresses to singers to tiktok stars, from serial killers to chefs to scientists to youtubers and more. If you're curious to see who was born on your birthday, you can use our database to find out who, what, where, when and why. You can search by birthday, birthplace, claim to fame or any other information by typing in the search box, or simply browse our site by selecting the month, the day, the horoscope, or any other clickable option.