Terrell Eldorado Owens is a retired American football wide receiver. He was selected by the San Francisco team, 49ers during the third round of the NFL Draft in 1996.

He played for the 49ers for seven seasons till 2004 when he was traded to the Philadelphia team Eagles.

In 2006 he moved from the Eagles to join the Dallas Cowboys and played for three seasons with them before moving to Buffalo Bills.

His last professional team he played for, before retiring, was the Allen Wranglers in 2012.

He was born to Marilyn Heard and Terrell Sr. He has four children named Terique Owens, Kylee Owens, Atlin Owens and Dasha Owens. 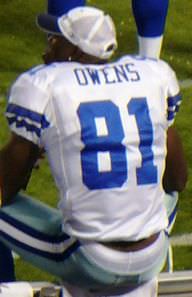 Terrell's birthday is in 64 days

Where is Terrell from?

He was born in Alexander City, Alabama, U.S..